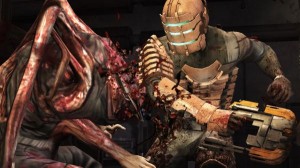 There has been a lot of con­tro­ver­sy involv­ing Dead Space 2.  Ear­li­er in the year it was announced that Dead Space 2 would not be com­ing to PC.  Then on May 12th on the off­i­cal Dead Space 2 twit­ter it was announced that Dead Space 2 would again be com­ing to the PC.
While it isn’t ter­ri­bly shock­ing that EA has decid­ed to go back on it’s deci­sion to pub­lish the game to PC it is sur­pris­ing to find out that they are work­ing on a Mobile/Handheld ver­sion of the game.  While this does­n’t tell us what plat­form it’s going to it is inter­est­ing none the less.  Per­haps PSP Go, Iphone, Ipad, Droid?  We will keep you updat­ed as we get more info.
EA has promised that Dead Space 2 will be among the line­up of games they show off at E3 this year.  They did not spec­i­fy how­ev­er what plat­form they would be show cas­ing it on.  Know­ing EA it will most like­ly be the Xbox 360 ver­sion of the game.