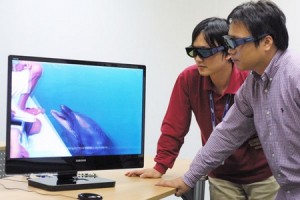 First off I would like to thank AceofNades69 and the­sound­man for the oper­tu­ni­ty to write here, and hope that I can bring some read­ers to the site. So, 3D who’s excit­ed for it? All I hear is a dense silence, so no one? The first sam­ple of 3D I digest­ed was Avatar. Sit­ting in a the­ater 4 rows from the screen try­ing to take every­thing in while wear­ing some redicu­lous pair of glass­es, all while try­ing to keep my eyes from pop­ing out of my head. It was not the most enjoy­able way to expe­ri­ence that movie.
Since Avatar it seems like every devel­op­er, man­u­fac­ture, and movie stu­dio wants in on a piece of the 3D pie. At CES this past year the big rave was 3D T.V.‘s and that every home would be replac­ing their HD sets that some of us just bought, until the price points were revealed. Three grand for the T.V., then on top of that three hun­dred for just two pairs of glass­es that need to be recharged? Ummm count me out, plus since I heard a fact that it does­n’t cost a dime to make T.V.s 3D enabled. Now Sony is on the band­wag­on and has con­vert­ed the PS3 to 3D. With games like Kil­l­zone 3 and Gran Tur­is­mo 5 com­ing in the 3D makes you won­der if this is next log­i­cal step.
I can see if 3D did more for a games as if it lead to devel­op­ing on the z axis instead of keep­ing most games based in a sin­gu­lar 2D plane. From what I saw at E3, this is not the case. It feels like 3D is being pushed on us like motion con­trol. It won’t effect your expe­ri­ence but if you want to get the most out of the sys­tem you need to have and use this. I don’t want to have to use this. I don’t have the great­est vision in the world and it’s slow­ly decreas­ing dai­ly, so on top of hav­ing to try to read the small print HD already is forc­ing on us, I’ll have things bounc­ing off my fore­head for hours at a time mak­ing my eyes strain even more. I just don’t see the advan­tages to 3D in the gam­ing world. The 3DS is a nov­el idea but when you issue a warn­ing that chil­dren under 7 should­n’t use the main fea­ture of your device, I think that is telling you some­thing.
3D can work in movies. You pay a lit­tle extra, get some goofy glass­es, and watch a 2 hour movie on a screen the size of a house. In that gam­ing realm, you have peo­ple such as myself that have some­thing around a 37’‘ T.V. and play for hours at a time. I spent at least 8 hours play­ing Crack­down 2 the day it came out, if I was play­ing for that long in 3D I would have gone blind and had to have my glass­es fit­ted with the bot­tom of Coke bot­tles just to try to see straight. I under­stand 3D T.V.s come in noth­ing but 42’’ and up, but I just don’t see their direc­tion for using this tech­nol­o­gy oth­er than to have a WOW fac­tor. With games I think it will hin­der the expe­ri­ence, Killzone3 could look twice as good as the sec­ond but since we have to have it in 3D and ren­der every­thing twice, it looks just like Killzone2 if not a lit­tle less. There was an arti­cle that IGN post­ed on the 3DS and devel­op­ers said that if you don’t use the 3D on the devise that the graph­ic capa­bil­i­ty sur­passed any­thing we have seen on the hand­held so far. So why do we need this tech­nol­o­gy and who is demand­ing it?
With all of the 3D movies com­ing out I guess I’ll have to stom­ach it at the the­aters, when it comes to my home and the games I play I will stick the 2D HD. 3D has yet to prove it’s self to be more than a gim­ic. When it becomes a game chang­er then I might con­sid­er it, but like motion con­trols I don’t think that day will come until we get true force feed back. So until we have a holodeck, please Scot­ty, don’t beam me up.