Gold Lancer is unlocked if you had it in Gears of War 2
Gold Ham­mer­burst is also unlocked if you had it in Gears of War 2
Gold Retro Lancer unlocked for any­one who played 90 match­es and then scored 100 kills with it in the Gears of War 3 Beta so as long as you kept the beta on your hard dri­ve until you start up Gears 3
Gold Sawed-off Shot­gun unlock is tied to get­ting the “Com­man­do” achieve­ment in Gears of War 1 (Com­plete all acts on insane Dif­fi­cul­ty in Gears of War)
Gold Nash­er unlock can only be got­ten by Vet­er­an Gears from Gears of War 2…BUT! If you plan on buy­ing Gears 3 the first week and play­ing online then you will auto­mat­i­cal­ly unlock it! BUT only if you play online in the FIRST WEEK!
You will also unlock a spe­cial medal if you are a Vet­er­an Gear from Gears 2 that you can “wear” in gears to let every­one know who you are!
It was also announced that start­ing this week­end August 20th there will be an EXP week­end every week­end until launch. Rod didn’t say what the mul­ti­pli­ers would be for each week­end but hint­ed that they would increase from week to week. So if you haven’t hit lev­el 100 yet, here’s your chance to work on that so you too can get the GOLD! 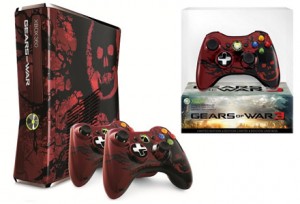 He men­tioned as well that if you buy the Gears of War 3 themed con­troller OR con­sole you will receive the Infect­ed Weapon skin for all 5 weapons which from his descrip­tion is an ani­mat­ed skin that “glows and pul­sates”! The Final announce­ment was that if you don’t have gears of War or Gears of War 2 that they will be on sale for Dig­i­tal Down­load on XBL start­ing august 23rd in the US, UK and Cana­da only.